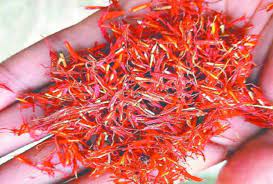 Saffron cultivation will change the fate of Himachal farmers

In fact, saffron is cultivated at an altitude of 1500 to 2500 meters above sea level. After the planting of saffron seeds, if it gets irrigation facility, then it gives a good crop. The high altitude areas of Bharmour, Saluni and Teesa of Chamba have been selected for the cultivation of saffron. Flowering has taken place in the saffron cultivation planted on a trial basis in Bharmour, Saluni and Teesa.

Dr. Rakesh Rana, senior expert of Council of Scientific and Industrial Research (CSIR), Palampur said that MoU has been signed with the state government for the cultivation of saffron in Chamba, Kullu, Mandi and Kinnaur. In four districts, 35 to 40 quintals of saffron seeds will be planted in 25 kanals of land. At the same time, Director Sanjay Kumar said that the cultivation of saffron is being promoted with the aim of strengthening the economy of the farmers. Farmers are being made aware.

Saffron will be cultivated here