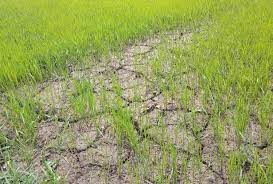 Problems increased due to delay in monsoon, farmers will now get electricity for 10 hours a day instead of 8

Haryana Power Minister Ranjit Singh said that two hours extra power would be given to the farmers for sowing of paddy due to delay in monsoon in the state. It will be supplied to the farmers with immediate effect. This decision has been taken on the instructions of Chief Minister Manohar Lal.

He said that now instead of 8 hours, 10 hours of electricity will be available for sowing paddy. With this farmers will be able to overcome the shortage of water in the crop. This facility of providing 2 hours extra power to them will be provided till the monsoon arrives.

The Power Minister said that electricity is in sufficient quantity in the state, so that farmers will not be allowed to face any kind of problem. He said that 12 thousand 125 MW electricity was consumed in a day in Haryana on Wednesday, July 7, which is a record till date. Electricity department does not impose any power cut in the state, if the power is interrupted for some time then it may be due to repair.