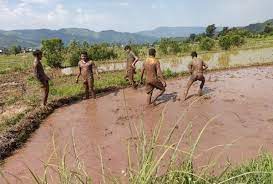 Now the drum beats in the vacant field, paddy transplanting with folk tunes

Children, young and old, dance to the beat of drums and folk tunes. Farmers planting paddy in waterlogged fields in Kharif season. Teenagers doing giddiness by applying a coating of wet soil of the field ready for transplanting and dragging each other in water. In the areas adjoining the LoC of Poonch district, this atmosphere of celebration at the time of paddy transplantation has been an old tradition, but this scene is being seen these days after years.

The centuries-old tradition was eclipsed by the incidents of ceasefire violations along the LoC. The celebratory tradition of planting paddy is being seen here after five years of the ceasefire agreement between the armies of India and Pakistan.

This special tradition of Kharif season was not being fulfilled due to shelling along the LoC for the last several years. Even if some people planted paddy in the forward areas, they would have avoided the sight of the Pakistani army. The drum beats and folk songs were kind of forgotten, but this time the centuries-old tradition has revived in the fields. Praying for peace on the Line of Control Farmers of Bagyaldara, Dalan, Malti, Digwar, Khari, Karmada, Ajot, Gulpur, Salotri, Mankot, Balnoi, Ghani, Savjian, Udhipura are planting paddy in a pleasant atmosphere. This time there is a lot of happiness among the farmers and they are praying to the above to maintain peace on the Line of Control in the same way.

Youth Vicky, Ankush, Imran, Rasmeet having fun in the field with paddy transplantation in Ajot said that this area is very close to the Line of Control. Often the Pakistani army used to rain shells here. The people of the house did not even allow them to come on this side. This time the shelling has stopped. Schools are also closed due to the Corona epidemic. We work and have fun in the fields all day long with the family members.