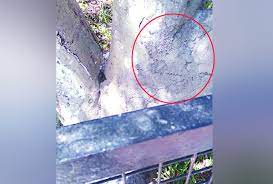 Cement plaster (paste) in apple horticulture areas of Himachal Pradesh is protecting the old apple trees from rotting. In many areas, apple orchards have done this experiment successfully. This technique is very inexpensive. It is being adopted where pits have formed in the trunks of old apple trees.

A mixture of sand and cement is being coated there. Many apples are growing in the districts of Shimla, Kullu, Mandi etc. using this technique. The motive behind this is to prevent apple trees from rotting quickly. If the apple stem or thick twig has formed a pit, it is first cleaned.

The rotten part is removed from it by scratching. After that sand and cement are mixed and filled in that hollow part. When it is filled, it is also applied at least two centimeters to the skin of the stem outside, so that the water does not enter inside the damaged part in any way.

Bagwan Kuldeep Kant Sharma, owner of Kant Bagh of village Gothu of village Panchayat Kamah in district Shimla, has said that many gardeners like him have made successful use of it. This can prevent old trees from rotting quickly. Such trees can be harvested for a long time.

Dr. SP Bhardwaj, who has been a Director of Extension at Dr. YS Parmar University of Horticulture and Forestry, says that this technique is used only on old trees, which range in age from 30 to 45 years. If the hollow part of the stem or thick twig is filled with cement, it will not penetrate the water and will stop rotting. With this, the tree will continue to harvest and will not be rotten soon. This experiment has been done in many areas and has been effective.