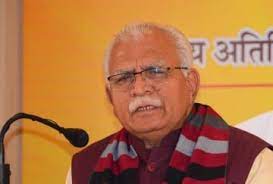 Land bank will be formed in Haryana, land will be sold to the government by bargaining

Avoiding the tedious process of land acquisition for government projects, the Haryana government has decided to set up a land bank in the state. Now other people including farmers will be able to sell their land directly to the government by bargaining and not under compulsion. The revenue department will handle this land bank and transfer it to corporations, boards or departments as needed.

This policy was approved in the cabinet meeting chaired by Chief Minister Manohar Lal on Thursday. The farmer will have to apply on the online portal of the Director of Land Records to sell the land. For this, they will have to give complete details of the land including the value.

The farmers can also advise the government to select the land for the development project at a particular location. This policy will be called Creation of Land Banks for Government Projects including Boards and Corporations and their settlement policy for Development Projects . For this policy, three committees, Land and Rate Inquiry Committee, Land Bank Committee and High Powered Land Bank Committee will be constituted.

It has been observed that many times the land owners (especially those residing abroad) have to sell their land under pressure or compulsion from middlemen in the market. At the same time, various departments face a lot of difficulty in providing land for essential services like water stations, power sub-stations, colleges and other specialized institutions of higher education to meet their day-to-day needs. The schemes from the land bank will be completed soon, because the government will know in advance how much land is with it in which district.

It can be transferred to government departments to be built by the revenue department for its projects within the municipal limits and up to two miles from it.

All departments including boards and corporations will try to locate such land which is in Shamlat Deh . This land can be used for setting up government offices.