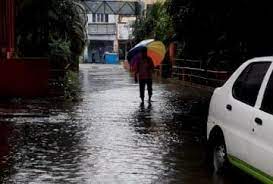 Drizzle rain in all districts of western UP including Meerut, farmers faces blossomed

After several days of scorching heat, it finally rained on Sunday. The faces of the farmers have blossomed due to the rain. After the rain, there was some relief from the heat and humidity, but due to waterlogging on the roads, the general public had to face a lot of difficulties. According to meteorologists, there is a possibility of continuous rain for a day or two.

On Sunday, the sky remained cloudy in Meerut since morning, in the afternoon it rained heavily from the city to the countryside. The weather became pleasant due to heavy rains in all the districts of West UP including Baghpat Bijnor.

It rained in Bijnor in the afternoon, while strong gusts of wind continued along with the rain. It rained for a long time. People breathed a sigh of relief due to rain, while farmers were facing the most problems due to lack of rain for several days. The farmers were busy preparing to irrigate the crops. Paddy irrigation was also started. According to Satish Kumar, observer of the Nagina Meteorological Observatory, there is still a possibility of rain.

In Khekra Nagar area of ​​Baghpat, where people had to face a lot of problems due to waterlogging due to heavy rains during the day. On the other hand, people breathed a sigh of relief from the heat when the weather in the district was pleasant. The standing crops in the fields swelled.

After a sudden change in the weather, it started raining in the city area around 1 pm on Sunday. It rained sometimes light and sometimes heavy for about two hours.

Due to rain, people had to face a lot of problems in traffic due to waterlogging on various settlements of the city, railway road, Pathshala road, Jain college road, Mohalla Ahiran, Linepar Basti etc. According to meteorologists, this rain is beneficial for paddy, sugarcane and fodder crops.