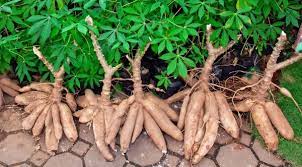 The Thiruvananthapuram- based Central Tuber Research Institute has demonstrated the capacity of new high yielding & pest-resistant variety of Cassava & Chinese potato by planting these varieties in 2 villages in the district.

While ‘Sree Reksha’ cassava variety was planted in ranches of five farmers from Kanakkupillaivalasai, the Chinese potato’s efficacy was proved in the fields of 8 farmers of Kuththapaanjaan. Both experiments have demonstrated high yielding capacity of these 2 new varieties & a good number of farmers have opted to cultivate these tubers in their respective farms.

According to G. Byju Principal Scientist & Head Department of Crop Production, CTCRI, Thiruvananthapuram , the new variety of cassava gives yield of 45 tonnes per hectare with goof ‘keeping quality’ & has a resistance to cassava mosaic disease.

G.Byju said that ‘With overwhelming response from farmers, the planting material of the ‘Sree Reksha’ & customized fertilizers were distributed to 10 farmers at Thaenpoththai on Tuesday for establishing the seeds of this high yielding variety, which will certainly increase their income’. The Chinese Potato is another commercially grown crop in the Tenkasi district with most farmers in Kadayam Union going in for the crop, for which the demand would be high round–the–year.

Planting materials of improved varieties were released from the CTCRI, ‘Sree Dhara’ were supplied & demonstrated at Kuththapaanjaan wherein 8 farmers raised this crop their field. Muthuraj, the Principal Scientist, CTCRI Thiruvananthapuram said that ‘This variety gave 50% higher yield than local variety when we planted it in demonstration field.

The farmer says that the huge size, shape & good keeping quality of the tubers fetched good price in market. The variety is being expanded to the nearby villages & blocks covering an area of 300 acres through the seed entrepreneurs since 2017 with the guidance of an Indian Council of Agriculture & Research’.

During their visit to the field at Kuththapaanjaan village to formulate the action plan for strengthening the tuber crops development in district, at that time the scientist have received the positive feedback from growers.

The critical inputs & agricultural implements were distributed to farmers during the interface & field visits. The Assistant Director of Horticulture, Tenkasi, Ramachandran explained in detail about the various schemes being executed for the horticulture crop growers.